During our discussion of game-based learning, some of you mentioned Kahoot, a quiz app used in K-12 and beyond.

We talked a bit about creating game guides or walkthroughs and the collaboration and writing required, which led us to this guide created by students at the University of Michigan: Being Not-Rich at UM (and some context on this guide from Inside Higher Ed).

We also played around with Google’s Be Internet Awesome initiative and games (maybe a little bit Black Mirror-y?).

A fantastic and informative piece of scholarship that helped the creator get tenure at Bucknell University: A Fair(y) Use Tale

If you’re interested in the Library Association of CUNY event The Labor of Open on 5/4, with a talk by Audrey Watters, more info is here.

Great to see so many of you at Audrey Watters’ terrific talk at the GC last night. She’s posted a transcript of her talk onto her Hack Education website, it’s well worth a read if you weren’t able to make it: http://hackeducation.com/2018/04/26/cuny-gc

Hi everyone, I wanted to post a link to the Association of College & Research Libraries’ Framework for Information Literacy in Higher Education, which Lauren mentioned in class earlier this week, which should help contextualize recent work by academic librarians on information literacy.

I also wanted to share some additional, optional reading for our 4/23 class on Digital Ethics next week: This recent article in the Chronicle of Higher Ed by Chris Gilliard “How Ed Tech is Exploiting Students” (paywalled, though if you’re on campus you should be able to read it via the link, and I’ve uploaded a PDF into the course group as well).

Hi everyone, just wanted to share some of the sites we discussed in class this past Monday:

– The Student as Producer project at the University of Lincoln, run by Joss Winn and Mike Neary: http://studentasproducer.lincoln.ac.uk/

– Jim Groom began the Domain of One’s Own project at the University of Mary Washington: http://bavatuesdays.com/domain-of-ones-own-a-technical-overview/

– And for use in our own research/publishing, Think, Check, Submit is a terrific resource: https://thinkchecksubmit.org/

Have a great break! 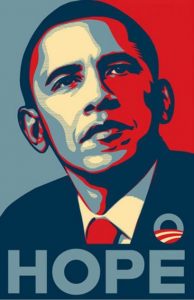 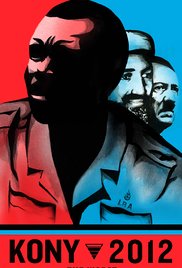 Per our class discussion Monday, March 19, here is the Obama HOPE poster designed by Shepard Fairey in 2008–American artist via skateboard culture–and the KONY 2012 poster “thank you gift” from the “Action Kit” for donating to Invisible Children, the organization that produced a documentary film with the same title. While the film became a YouTube video phenomenon in 2012, the very public breakdown of its maker, Jason Russell, came to dominate the media coverage, shifting the story from Kony’s atrocities and the Invisible Children, to Jason Russell’s personal life as tabloid fodder, exposing his evangelistic agenda.  The whole arc playing out in real time during my Media Studies 101 course Spring 2012 semester, as we delved into the film and discovered its bias, gave my students a great example of persuasion, media hype, fame/celebrity and an emerging medium (YouTube) as they employed critical thinking habits in analyzing the film and very complicated attending humanitarian and political issues.

Hi everyone, thanks for a great discussion tonight. Here’s the op-ed from a couple of weeks ago that we mentioned in class tonight, about the problems with YouTube’s recommender engine: https://www.nytimes.com/2018/03/10/opinion/sunday/youtube-politics-radical.html

Hi everyone, thanks for a great discussion in class last night. On my way home I was reminded of this recent research that’s garnering lots of discussion from critical educational technology folks on Twitter, posted here by Chris Gilliard (we’ll be reading some of his work in a few weeks):

“Almost every prediction we make is personalized, without knowing who the individual is” 🤔🤔🤔 https://t.co/PAzZaQdM6Z

Gilliard’s whole Twitter thread is worth a read, and here’s the original announcement of this research from the University of Arizona: Researcher Looks at ‘Digital Traces’ to Help Students

What are the implications of quantifying students in these ways?

Here is the image that I was referring to, “Invoice for Emotional Labor.” I thought that it illustrates concepts in the Abreau piece about quantifying care work. 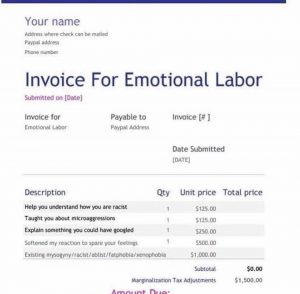